What Should a Skydive Cost?

What Should a Skydive Cost?

Price buying. Sigh! Unfortunately, it's a part of our lives, for better or for the absolute worst.

To save a few bucks, we stop going to the mom-and-pop storefronts on Main Street and zombie on over to the big red bullseye. We eschew meat from the cows raised in the big, grassy fields just outside of town to buy factory-farmed protein from grey-faced animals that knew they were doomed the minute they could stand up on their wiggly little legs. We stroll miles of fluorescent aisles to pick up armfuls of plastic from China, even when our neighbors make those same things--and, if not, Etsy sure does. Farmer's market eggs are pushed aside for battery-cage versions that come at half-price; the corner bookshop gets ignored for the 24-7-365 online behemoth; we even risk the half-price sushi (and that's just a forehead-slapper, right there).

At the end of the day, as a culture, we happily trade craftsmanship and quality for disposable utility at a cut price. And usually, in these choices, we don't actively face the consequences.

So, all that being said, it's not surprising that potential first-time tandem jumpers are buying on price, too--or, at least, tempted to. It's easy to lump in spending on a skydive with spending on, say, a theme-park ticket. But let's take a little look closer, hey? Cheaper isn't always better, especially--and you know this already, intuitively--when it comes to this kind of detail-oriented, safety-requisite activity.

What if you bought a cheap-cheap-cheap theme park ticket to a park you'd never been to, then showed up and saw this?: 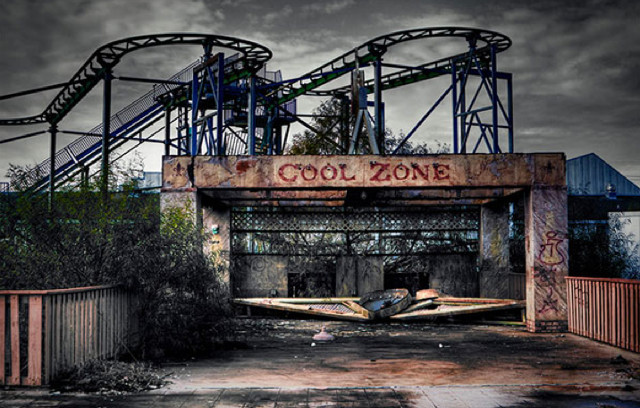 You'd probably turn right back around and head for the hills. No? You might go in, but you would not get on a ride. You wouldn't trust your tender mortal coil to the likes of that roller coaster, would you?! I mean, it looks like it's about to pop right off the rails.

The thing is: If you don't know your way around dropzones when you show up to the dropzone equivalent of that cut-rate theme park, you likely won't know it. You'll probably be able to spot the burned-out, disinterested staffers, but you don't know what a dropzone airplane in excellent condition looks like, nor could you meaningfully judge untrustworthy parachuting equipment. You're trusting the dropzone to keep an eye on that stuff, right?

If the price you paid is bargain basement, you can be pretty well assured that you're in a zombie theme park. Run! Quick! You will be eaten! (Or, at least, shaken-up. Maybe injured. Gulp.)

In order to run a safety-first operation with staff, equipment, and aircraft you can trust, a lot of money needs to go into training, care and maintenance. This is true in every single facet of aviation. It's especially true in skydiving, which has lots of complicated moving parts. For the safety of everyone involved, introducing new skydivers to the sport can not be done on the cheap.

It's not just the planes and the parachutes, either. It's the people. The professional jumpers on the dropzone, have to be just that: Professional. Our professional skydivers hold some serious certifications. They have, each and every one, put in hundreds of hours of training and completed thousands upon thousands of collective successful jumps. We trust them entirely--which is why we put them in such a responsible position. Skydiving dropzones that settle for less tend to suffer the consequences.

Going for a bottom-line price requires entirely too much of a professional skydiving staff. Since they're forced to churn out a high volume of jumps, they get exhausted. Their customer service is clearly kneecapped, but there's another important element of their toolkit that suffers: their reaction time and their alertness. We give our tandem instructors appropriate workloads that allow them to effectively do their high-pressure jobs with a happy smile.

At the end of the day, before you get ultra-focused on how much a tandem skydive costs, remember: A brilliant skydive is one of the most worth-it things you'll ever do. Do yourself the favor of staying out of the zombie zone and join our jolly band. We'll make it worth every penny!

We can't wait to go back! One of the most thrilling experiences of my life.